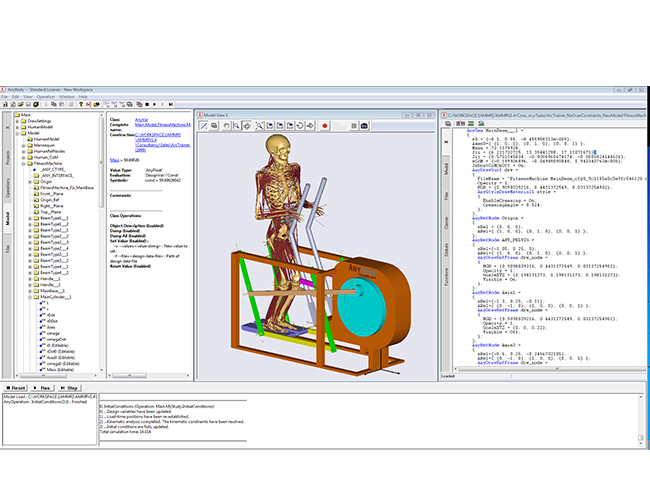 “A lot of repetitive work processes are no longer needed and instead we can spend more time on adding value.”

AnyBody Technology was founded in 2002 and the company develops software to model how humans and machines interact with each other. The company has developed a so-called musculoskeletal model that is a universal virtual model of a human skeleton with joints and muscles, which is used to study how the body interacts with machines.

So far it has been very complex and taken a long to write the code necessary to create models of machines inside the modeling system. To combat this inefficiency, AnyBody Technology has developed a special plug-in for SolidWorks, which makes it possible to retrieve the models of the machines directly from the CAD system. This opens up a range of new opportunities for both the company and its customers, says Michael Damsgaard, who is development manager at AnyBody Technology.

“Our idea using SolidWorks is that the machines typically already exists as CAD models, which contains virtually all the information we need. Instead of having to model the machines in our own system with the plug-in for SolidWorks we very easily can write the necessary code, press a button and then the model of the machine is ready in our system, “explains Damsgaard.

He emphasizes that the use of SolidWorks provides AnyBody Technology with easier access to new customer groups, because the usability of The AnyBody Modeling System has been greatly improved using SolidWorks for machine modeling. At the same time, the integration of the design process with the simulation system has become much closer:

“SolidWorks has a good interface with other systems. This means that smaller companies will be able to use our software in the development of their products. Also, for some of our existing customers, their work has become easier. They can make changes more quickly and flawlessly. ”

In addition to the software development, AnyBody Technology also operates a consulting business. With the addition of SolidWorks, it is now possible to receive CAD models from customers and import the models into the simulation system quickly and seamlessly.

“This means for us that we now have access to companies that previously would not have dreamed of using our technology because it has been too complex to handle,” says Michael Damsgaard.
He believes that the integration between 3D CAD and the AnyBody Modeling System will be much closer in the future: “We expect that our technology will be included directly in the CAD system. This will make it possible to link man and machine closer together, and to make typical biomechanical analyzes more accessible to customers who are used to working with the CAD tool, “he says.

According to Damsgaard, SolidWorks was the logical choice of 3D CAD systems because it is a widely used and popular system that is easy to use and relatively inexpensive to acquire. Additionally, access to the programming interface is open and easy to access, which is important for a software such as AnyBody. “The price is obviously important for us as a small company, but it has not been an issue at least for our typical customers”, he says.

“SolidWorks has helped to ensure that we can bring new and increasingly sophisticated products to market faster. This is a decisive competitive factor for us.”...