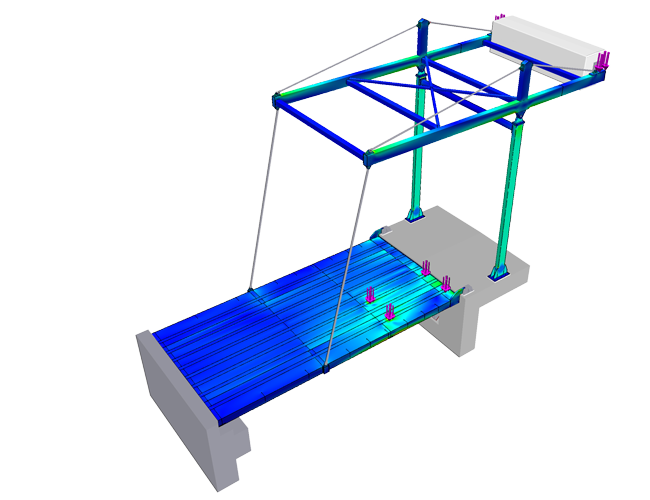 ”Because of the size, it was a big task to make up the complex grid (meshing), which forms the base. Strength calculations were carried out based on the Finite Element Method (FEM). The size of the grid made it necessary to perform very large calculations, but SolidWorks Simulation solved the task without problems.”

The biggest challenge in doing the simulations needed for an optimal construction of the bascule bridge was the physical size and sleek design of the bridge, says Albin Särndahl, who is an engineer with Sting.

The 3D CAD model of the draw bridge was originally constructed in another 3D CAD system, but Sting preferred to make it ready for construction with SolidWorks because the company believes SolidWorks Simulation is the best to resolve the simulation tasks. The company currently has two SolidWorks licenses. Albin Särndahl says that Sting are quite pleased to collaborate with PLM Group: ”We’ve had training with PLM Group, and we have regular contact with the support department. We are very pleased with the cooperation,” he stresses.

"One of the the major benefits of using SolidWorks both from a time and cost saving perspective has been to be able to reduce the number of physical prototypes by more than 50 percent. Our goal is to ...

END_OF_DOCUMENT_TOKEN_TO_BE_REPLACED

"We often take advantage of existing standard parts and components when we develop new products. Changes in the assembly have an immediate impact on the entire 3D model.“...

END_OF_DOCUMENT_TOKEN_TO_BE_REPLACED

“We were testing SolidWorks for a year but continued to work with SolidWorks also after the test period.”...